MIAMI GARDENS — When the assignment is to post a story immediately after a game, it can sometimes be a challenge. The challenge is that much greater when the game ends on the final play.

This was my responsibility Sunday, and for those curious about how it unfolds, I thought it might be interesting to take a peek behind the curtain of sorts.

By the start of the fourth quarter, when the Patriots went ahead 30-28, I began to formulate two possible story angles.

If the Patriots won, a piece on quarterback Tom Brady and tight end Rob Gronkowski playing leading roles seemed like a solid play.

If the Patriots lost, the piece was trending toward the defense taking a step back after a strong game against the Vikings the week before. 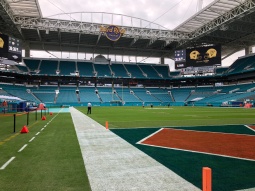 So at that point, I began to formulate two different stories as the game was unfolding. Then, after the Patriots went ahead 33-28 on a 22-yard field goal with 16 seconds remaining, I got the offense story ready to post.

But the stunning final play changed everything.

At that point, I had to rewrite parts of the defense story to freshen it up, highlighting the final play. It posted minutes after the game ended.

So what happens to the offense story? Nothing, actually. It ends up on the “cutting room floor.”

Recapping this turn of events serves as a reminder of how one play can truly change the direction of the discussion after a game. With this in mind, here is an unedited version of the story that would have posted had the Dolphins not scored on the final play (I added Josh Gordon late).

MIAMI GARDENS – To overcome their recent struggles in Miami, the New England Patriots turned to three of their best players to will them to victory.

And welcome, Tom Brady, to the winner’s circle at Hard Rock Stadium – a place where you’ve had more road losses than any in your career (9).

Make no mistake, this wasn’t the Patriots’ best performance, but forget the style points for a moment.

The result clinches a 10th straight AFC East championship, which is a remarkable accomplishment. According to Elias, New England joins the Atlanta Braves as the only franchises in the NFL, NBA, MLB or NHL to win at least 10 straight division titles. The Braves won three straight from 1991-1993, and another 11 straight following the 1994 strike-shortened season.

It took some impressive work from Gronkowski, Gordon and Brady because the defense struggled for extended stretches, particularly against the run.

Also, Brady made an uncharacteristic mental mistake at the end of the second quarter when he took a sack with no timeouts remaining, costing the team at least a field goal. Not that it would have been any guarantee, because kicker Stephen Gostkowski missed his first extra point of the season, as well as a 42-yard field goal.

But two blocked punts, a revival from Gronkowski (8 catches, 107 yards, TD), Gordon coming through in the clutch on a clock-draining drive, and Brady delivering some lasers were highlights.

And there was one record of note: Brady’s three touchdown passes give him 582 for his career (playoffs included), which broke a tie with Peyton Manning (579) for the most of all-time.