BOSTON – Chances are you won’t get too far in your career if you don’t have someone who is willing to go to bat for you and believes in you. My trip to Sunday’s Patriots-Dolphins game got off to a great start because I unexpectedly bumped into someone who did that for me.

Bob, or “Lobie” as he was often referred to on TV, was a legendary sports anchor on WBZ-TV from 1979-2008. He had opportunities to go on to higher-profile, national gigs, but elected to stay in Boston all those years. If I had to pick one word to describe his work, it would be “fun.” He always had the fan in mind.

We reminisced about that, and more, after bumping into each other in the JetBlue security line Saturday morning; Bob was heading to Hilton Head, South Carolina, I was en route to Miami.

I told him that whether it was the “panic button” he used to press when teams hit a rough stretch, or his trademark line “Why can’t we get players like that?” when a former Boston athlete went on to success elsewhere, what I always appreciated about his approach was that it never seemed mean-spirited or trolling in nature.

“I was just trying to make people laugh,” he said. 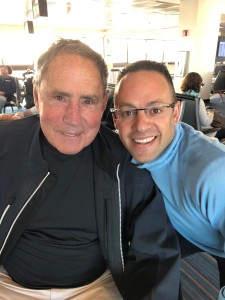 I also told him how much I appreciated him taking a chance on having me join his popular “Sports Final” program on Sunday nights, only to learn something new about how it actually happened.

It turned out Bob was dining at Joe’s American Bar and Grill one day in 2006 when he saw my father Roy. The two had once been competitors – my dad was a sportscaster for Channel 7 in Boston in the late 1970s and 1980s – but remained cordial with each other over the years.

The way Bob remembers it, my father said something like this: “Hey, if you’re ever looking for someone to talk about the Patriots on your show, you might consider Michael.” I had recently joined the Boston Globe at the time.

Bob followed through on it, and we laughed this morning when reflecting on how nervous I was in those years, sharing the set with Michael Felger, among others, in these incredibly large chairs that made me look even smaller than I actually am (how is that even possible?).

We laughed when talking about how we might have four minutes for a segment, and Felger, so passionate, would use the first three minutes on his first answer. That left me little time to chime in, but in truth, I was just happy to be sharing the set with both of them.

It’s the way I still feel today, even as Bob is enjoying his retirement, passing the torch to Steve Burton, Dan Roche and Levan Reid, three friends with whom I’ve shared similar meaningful and memorable experiences with since.

Of course, Bob also wanted to talk about the Patriots and how it’s been an interesting year for the team. He noted how Bill Belichick always seems a step ahead of the competition, and flashed a wide smile when telling the story of how he was watching the Patriots-Vikings game last weekend and thought that Vikings receiver Adam Thielen would make a great Patriot.

Soon enough, Thielen and Belichick were jawing back and forth during the game – with Belichick telling a fiery Thielen to “shut the f— up!” — which is exactly the type of exchange that would have made Bob light up on the air.

So as we talked at Logan Airport’s Gate 36, he said, “Wouldn’t that be great if it actually happens in a couple years? They’d be able to look back at that and tell a great story.”

Bob, who will be celebrating his 75th birthday later this month, also got a kick out of Belichick’s no-tolerance, sarcastic-laced answer to my post-game question about Tom Brady finally reaching 1,000 yards rushing for his career.

“Yeah, that’s really important to us,” Belichick had said with a semi-smirk.

We laughed about that, because you never know what you’re going to get from Belichick, which can be part of the fun.

It was also a reminder of what stood out to many about Bob and his unforgettable career.

He always made it fun.