BOSTON TO JACKSONVILLE – With the Patriots’ first regular-season road trip of the season this weekend, one of the more frequent questions asked is, “Do you travel with the team?”

The answer is no, as Bill Belichick understandably prefers to keep the traveling party free of media members who could be privy to information that he wants to stay in-house. Examples this weekend would be if offensive tackle Marcus Cannon and running backs Sony Michel and Rex Burkhead are on the trip, or if an injured player was on the return flight walking with the aid of crutches. 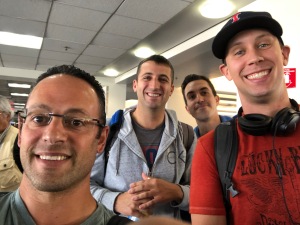 So reporters fly commercial, and we are often on the same flight. Thus, when I arrived at the gate Saturday afternoon, it was no surprise to see Jeff Howe of The Athletic, Kevin Duffy of the Boston Herald and Mark Daniels of the Providence Journal there. Thanks for the pic, guys.

They acknowledged my excitement for the 3:23 p.m. departure, which is about as good as it gets for a reporter covering a team who also has a 9-year-old daughter and 6-year-old son at home.

This is a great job, but in what might be one of the biggest drawbacks, you can miss a lot of things on fall weekends with your kids. And a lot can fall on your significant other to pull the weight when you’re not around.

So on certain away weekends, I have a theory that if you can “steal a Saturday”, it can be an unexpected win that helps balance a rewarding-but-demanding job with all-important family time.

A 3:23 p.m. departure time helps do that. You get the entire morning before leaving for the airport, and still give yourself a chance to get into your destination at a reasonable hour. There was a 9:21 p.m. departure option, which would have opened up the entire day, but that would spill into Sunday and you’re likely not getting the desired rest. 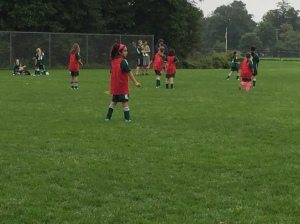 So this was perfect.

Dad made homemade waffles at 7:30, led the way to a 9 a.m. swim lesson for the little guy, and then was there for a 10:30 a.m. start for a fourth-grade soccer game. When your daughter shows a not-seen-before effort and persistence, and the team comes back from a 2-1 deficit with less than five minutes remaining to win 3-2, it is about as good as it gets.

The weekend was off to a great start, with a “stolen half Saturday.”

And now, as Bill Belichick says, it’s on to Jacksonville.

3 thoughts on “Tales from the road: Not much better than ‘stealing a Saturday’”