CHARLOTTE – Sharing some personal anecdotes, notes and thoughts from a road trip to cover the New England Patriots’ 25-14 loss to the Carolina Panthers:

1. My working role for the game was more on the TV side, which meant providing reports on both teams in the pre-game (NFL Live at 2 p.m., SportsCenter at 6:15 p.m.), and then post-game (SportsCenter at 11:15 p.m.). With my primary background with the Patriots on a daily basis, it required some catch-up work to do, and it’s always appreciated when folks like Panthers head coach Ron Rivera take the time to inform and engage. 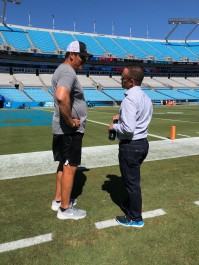 2. As the Panthers held the ball for 9:59 on their opening drive, did anyone else have the same thought I did? It reminded me of Patriots-Giants in Super Bowl XLII. The Giants got the ball that night and the opening drive was 9:59, setting the tone for that game.

3. I love re-watching the game broadcast, as play-by-play man Bob Socci, analyst Scott Zolak, sideline reporter Rob Ninkovich and the studio combo of Andy Hart and Paul Perillo entertain and provide great insight. Next time I see my good friend Zo, I’m going to ask him if he purposely went all Tommy Heinsohn on Devin McCourty’s PI call on the opening drive, as there looked like a tug on the jersey to me. Maybe not PI, but illegal contact or holding seemed reasonable there.

4. With rookie punter Corey Bojorquez once again not getting any work, it strengthens my instinct that the club wants to limit his exposure to others in games so he might have a better chance to clear waivers and land back on the practice squad. I wonder if rookie quarterback Danny Etling might be in a similar situation. Etling has hardly played this preseason.

5. The first player down the field on the opening kickoff and punt for the Patriots: Nicholas Grigsby. Special teams captain Matthew Slater affectionately calls him Tracy White 2.0, an ode to the former Patriots special teamer who, like Grigsby, was fast on the field and soft-spoken off it.

6. Notable post-game moment as I was trying to get Cam Newton for a 1-on-1 interview on the field: Seeing Panthers receiver Devin Funchess and Tom Brady sharing some extended Michigan bonding time. Those Wolverines stick together.

7. The Patriots are traditionally one of the lesser penalized teams in the NFL, and Bill Belichick deserves a good share of credit for that. The way he handled offensive tackle LaAdrian Waddle’s unnecessary roughness penalty in the first quarter was a good example of it. That type of play is inexcusable, so he pulled Waddle for the rest of the series, before inserting him back in the game on the next series. It’s one thing to preach discipline, but if the actions don’t back the words, it lessens the impact of the words.

8. Because my post-game responsibilities for TV were centered around Cam Newton’s injury scare, it led me to the Panthers locker room after the game, where it was nice to catch up with former Patriots defensive tackle Kyle Love (2010-2012), who is still going strong in his seventh NFL season. The Panthers have been a good fit for him.

9. I don’t know if the Lions would consider it, but receiver Golden Tate is the type of trade target I’d inquire about for the Patriots. Playing fantasy GM, a package of defensive tackle Malcom Brown and linebacker Elandon Roberts would be something I’d float out there to see if there was a bite. Something tells me Lions fans would tell me I’m not realistic, even though Tate is entering the final year of his contract and the Patriots might have to do some cap maneuvering to bring him on.

10. Preseason games might be painful to watch at times, but one thing that made this one a bit easier was that it wrapped up in 2 hours, 54 minutes. I like those quick games.

11. There are many players who represent the NFL in a positive light and Panthers tight end Greg Olsen is one of best. I’ve been hoping our paths would cross, and when they did last night, I shared with him how we lived through some similar experiences with our kids. His sincerity, as we talked over Cam Newton blaring loud music, highlights a theme I’m hoping to share more with readers this year: I’d like to keep taking you behind the scenes to learn more about players and inner workings of this job.

12. Olsen, now in his 11th season, said he’s been around long enough to know not to read too much into preseason action/results. I thought that was good context for all the reporting and analysis on these games.

13. It was a small thing, but it stood out to me: Tom Brady’s game management. The preseason helps fine-tune those all-important skills and as the two-minute warning approached in the first half, I took note of Brady using the hard count to try to draw the Panthers offsides, knowing that the clock would be stopping and he never intended to snap the ball.

14. Brady often talks about how building a trust comes in pressure situations and that’s why his fourth-down completion to Phillip Dorsett, to gain a first down, was probably the signature play of the night. Something for the two to build on, for sure.

15. Like the Patriots, the Panthers have a set-up with offices at their home stadium in Charlotte and practice fields in the back. But new owner David Tepper is looking at possibly building a new team facility across the border in South Carolina – with games still played in Charlotte — which would truly make them the Carolina Panthers. I always felt it was an advantage for teams to have everything in one place, like the Patriots do.

16. From the plan-ahead department: For those planning to attend the Nov. 11 Patriots game against the Titans in Nashville, plans are in the works for a Tweet up on Saturday, Nov. 10. Tentative location is Piranha’s around 3-4 p.m. local time.

3 thoughts on “Personal anecdotes, notes and thoughts from Patriots’ road trip to Charlotte”