It was the last day of school, and my 9-year-old daughter Talia wore the shirt she received at the camp, and later had signed by Welter herself. She wanted her friends to see it. She wanted to tell them all about the camp, who she met, and what she learned.

That was the hope, of course. 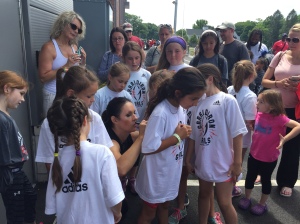 Welter broke barriers when she became the NFL’s first female coach in 2015, hired by then-Arizona Cardinals head coach Bruce Arians to work training camp and the preseason. That came after her own stellar playing career. Football has given her a lot — she talks often about her “football family” as she energetically sprints around the field — and now she’s spreading the word on what a great game it is. One of the ways she is doing that is to inspire girls to dream big, whether it’s football or something else.

The message is one that I wanted Talia to hear.

In a morning agenda that would have made Tom Coughlin proud, we arrived 25 minutes early (and the girls each had a bio sheet to read about the trailblazing coach). Welter greeted each camper personally, and with our group of four that had also been rocking to a Laurie Berkner DVD on the ride up, she sensed some nervousness. That’s when she got down on one knee, spoke to them about the importance of having confidence when meeting someone new, before saying she wanted a re-do.

“Pretend we didn’t just meet and let’s do this again!” she said with an empathetic touch as she walked away, before circling back to them and extending her hand, saying, “Hi! I’m Jen!”

The girls all laughed, gave a more confident introduction, took a playful picture, and then raced onto the field for the next three hours. 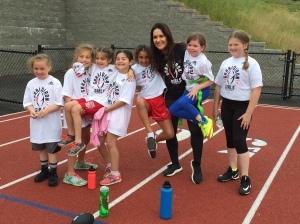 There were more than 100 campers on hand, which included flag football teams from Mexico and Brazil that were visiting as part of a tournament. After warmups and introductions of staff members, campers split into seven different stations and learned some of the fundamentals of football: Snapping, throwing, catching, breaking down to be in the best position defensively etc. Every group visited each station once, before the day concluded with mini-scrimmages.

Ages of campers ranged from 6 to 18. Some were playing football for the first time. Others clearly had some background in the sport.

When the camp concluded after three hours, Welter stayed behind to sign autographs. She was patient, and as some parents thanked her for making the time to create a personal connection, she explained that it was her pleasure.

It was the exclamation point on a unique morning, which we followed with the most predictable call in the New England-based parent’s playbook: A trip to Dunkin’ Donuts.

Lots of smiles. Lots of fun.